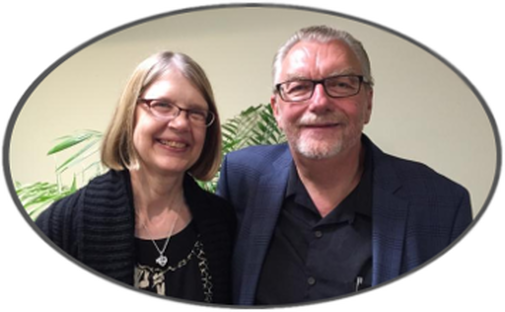 Dr David and Sherry Nichols are the senior leaders of Heart of the Father Ministries.  They met at North Central Bible College (now North Central University) in Minneapolis, MN.  They married in 1973 and have four sons who are all married, and twenty grandchildren.

Dr Nichols was born and raised in Oshkosh, WI, and holds degrees from North Central University, Minneapolis, MN; Bethel Theological Seminary, St. Paul, MN; and Marquette University, Milwaukee, WI.  He has over forty years of ministry experience as pastor, college professor, academic dean, and missionary evangelist.  He is ordained with the General Council of the Assemblies of God, Springfield, MO.  Sherry Nichols was born and raised in Worthington, MN, and has a degree from North Central University, Minneapolis, MN.  She has ministered alongside her husband for over forty years.  She holds ordination with Five-Fold International, Springfield, IL, and has ministered in many states of the USA, India, Tanzania, and Benin.

In 1997, Dr Nichols had a life-changing encounter with Jesus on a road in North Dakota.  Jesus asked him, “Are you a Pharisee?”  The answer was too painful to face that day, but two weeks later, David and Sherry together found themselves running to the altar at Brownsville Assembly of God in Pensacola, FL.  There they experienced the conviction of sin, especially the “good evangelical sins,” and were soaked with the Father’s amazing love.  Through many other encounters with revival fire, they began to see the people of the church and the world through Father’s eyes.  In the year 2000, they founded Heart of the Father Ministries, International and since then they have ministered the Gospel of the Kingdom in eighteen states of the USA, Peru, Argentina, Belgium, Ukraine, Ghana, Benin, Cameroon, Burundi, Rwanda, Uganda, Tanzania, India, and South Korea.

Dr David and Sherry Nichols have preached the Gospel to over one million people face-to-face, with over 350,000 responding to receive Jesus as their Savior.  Twice they have ministered to over 100,000 people at one place, at one time, in South India.  Instructed by Matthew 24:14, they believe that the Gospel of the Kingdom shall be preached in all the world as a witness to all the nations, and then the End will come. 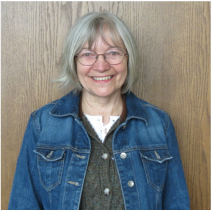 My name's Jan Reynolds and I joined the Heart of the Father Ministries' staff in June 2014. I'm an active member of both the office staff at the ministries' Rush City Headquarters, as well as participating in both International and USA Healing Festivals.

I've really been a groupie/intercessor of HOTFM since 2000 when I met Dr. and Sherry Nichols when they brought the newly launched ministry to my local church.

I love art, love to see people "color outside the lines" believing for the greatness Father God created them for. With HOTFM that is a frequent and normal sight! 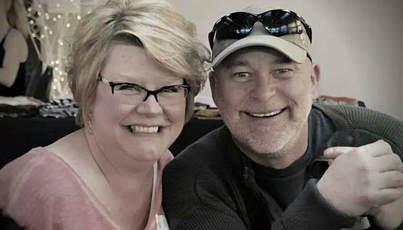 Pete Couper lives in Pine City, Minnesota with his wife, Tammy. They have been married since 1991 and have four children. He and his family attend Community Worship Center in Sandstone, MN.

Pete's journey changed after the death of his 19-year-old daughter, Allison, in 2007. It was at this point he knew that following the LORD was different than believing in Him. The Living God had laid out a new path before him and revealed in Jeremiah 10:23, "I know, Lord, that our lives are not our own.  We are not able to plan our own course" (NLT),

Before following the LORD, out of high school Pete served in the USAF's Strategic Air Command at Mather AFB, CA. Pete went on to become a EMTP in South Texas and as an instructor of Paramedicine at Texas State Technical College. He then went on to pursue a career in Colorado as the Director of Western Eagle County Ambulance District, where Pete was trained in high mountain rescue, gaining his ACLS and PALS certification.

He furthered his career by heading back to Minnesota and received his degree in Information Management Systems in Columbia Heights, MN.  After 37 years, in the Spring of 2011, Pete moved from the private sector into full time ministry with Breakthrough Ministries, Inc.  He served the ministry as the Vice President, Chairman of the Board and as a street minister.  Pete has a Bachelor’s degree in Leadership in Ministry and graduated Magna Cum Laude in 2015. Pete also serves as a Chaplain with Pine County Sheriff's department.
​
In October 2016, Pete moved to Heart of the Father Ministries as Director of Outreach and serves as an instructor at the Heart of the Father School of Ministry in Rush City, MN. 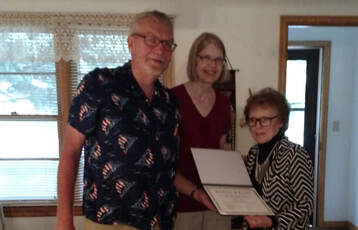 Dr David and Sherry Nichols presenting Pastor Twyla Hass with her Certificate of License to Preach with Five Fold International Ministries.
In addition to the above five members of Heart of the Father Ministries, many, many more names should be included; really too many to list.

The intercessors who pray regularly for the ministry in include two groups:

Pastor Twyla has been with Heart of the Father Ministries since the beginning in the year 2000.  As a seasoned Intercessor, she is the leader of our Covenant/Core Intercessory Prayer Group who meet several times a week in her home of Lamberton, Minnesota.  Twyla and her team spend hours each week in focused intercession for favor, safety and fruit for the ministry (souls for Jesus).

HOTFM House Church
Founded and located in Lamberton, Minnesota.  This anointed church meets twice a week, Sunday morning and Wednesday evening, to worship together, pray together and receive teaching from the Word of God.  As Pastor Twyla often says, "Just give them Jesus!"
** For more information: (507) 360-3040 or info@heartofthefather.net


Intercessors
Nearly 400 individuals located throughout the USA and the world pray for Kingdom progress for Heart of the Father Ministries.
** For more information about becoming an Intercessor click here.

...and then, there are the dozens and dozens of Pastors, many festival volunteers, and many financial
supporters of the ministry!

God has put together an amazing family at Heart of the Father Ministries. May God always be glorified by everything we say and do as we expand and explode onward and upward in His precious and glorious name!